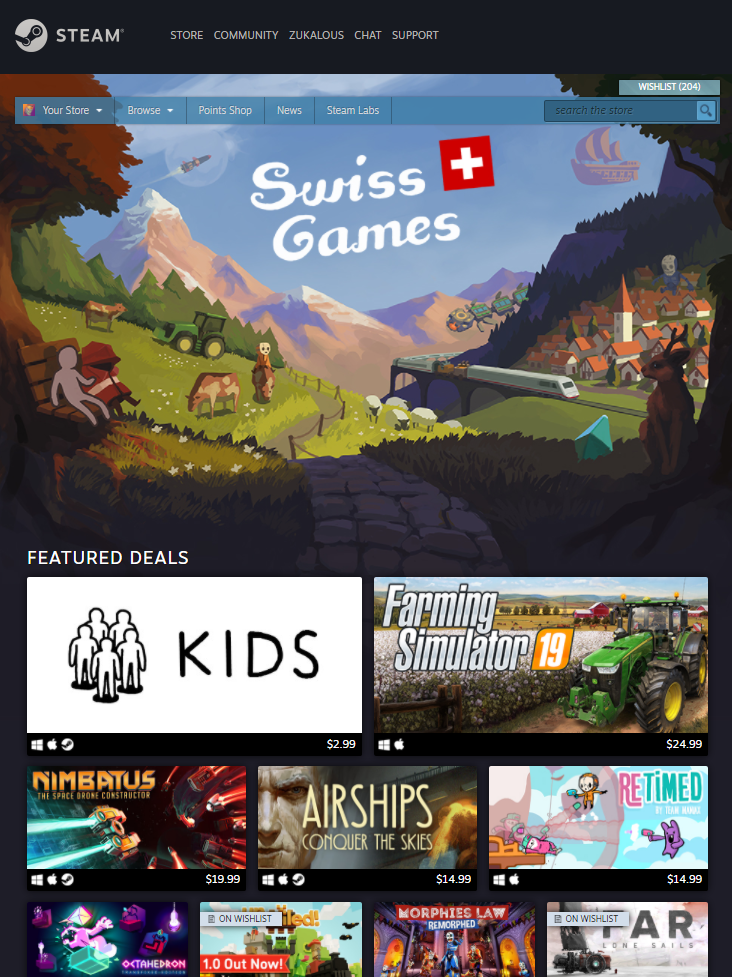 Thousands of Steam games are released every year and the quality of them is constantly rising. Similarly, our customer base has a finite amount of time and can only play 1 game during that time. So why should I help you with your game’s marketing with this free blog since I am also making and selling my own games? Why should any other indie help each other considering if someone buys and plays my game they are not playing yours?

This week’s column was inspired by this thread from Tanya X Short here.

I didn’t want to just slide into the great points she was already making so I did what anyone who is terrified of the time and soul sucking nature of social media would do, I waited a week and wrote an 1300 word essay instead.

Basically the urge to help our fellow indies is not a woo-woo hippy lets-come-together-because-love-conquers-all thing. There is an actual, hard-core, fundamental, free-market, economic reason why indies help each other: we will sell more games that way.

It is a called economies of agglomeration. It seems totally counter intuitive but it is proven that some competing businesses will actually do better when they clump together instead of trying to win through some winner-takes-all competition. This podcast episode explains it so better than I can so I highly recommend that you listen to it: Why Clusters of Like Businesses Thrive

Have you ever gone out drinking near a college campus? All the bars and clubs line one street or are are at least located in one giant block of debauchery. Why? Aren’t they competing against each other? You can only drink so much in one night?

Have you ever gone shopping for a new lamp and ended up at your town’s “furniture district” or “design district” or “antique village?”

What about buying a car? Every time I have bought a car it was after heading to the local “auto mall” where tons of competing dealerships lined a single street.

If you notice, all these clustered businesses sell goods where customers pick them based on “feel” or “taste.” If I need a lamp, I have a vague idea of what would match my living room but I won’t know what I want until I see it. I just need to look at a lot of lamps. When car shopping I need to test drive a lot of cars to see which one “feels” best. Bars are all about the scene. What kind of mood are my friends and I in? What place has the best vibe or the best band tonight?

Basically those businesses thrive by clustering together because as a consumer I can comparison shop faster and easier if I go to the business that are clustered rather than the solo shop that is on the edge of town.

Let’s say we theoretically had a city that looked like this  and there were 3 “feel-based” business equally distributed.

Situated like this, I am equally likely to visit each one when I do my comparison shopping.

But, if one shop decides to get smart and move right next to the other one, guess what, as a consumer I am more likely to go to these two because now I don’t have to drive as much to do my comparison shopping.

But don’t shops A and B compete?

Yes businesses A and B have more competition. Their prices are going to be lower than the prices at store C. But that slight decrease in price is more than made up by the increased foot traffic that comes from all those people who made the exact same decision I made to go to the clustered stores.

Business A and B are not in direct zero-sum game competition. Business A knows that even though I went to them first but left to buy my lamp from business B, there are just as many people who started at business B and decided A had the better lamp. The competition balances out.

Steam is basically the video game equivalent of the local furniture district. Sure each of us could put our game on our own website and collect 100% of the profits instead of the 70% we get from Steam. But the foot traffic to our dinky site is significantly less than the mega mall that is Steam. Consumers don’t like driving all over the internet to shop for games. They want a one-stop-shop that is trusted, has all their games in one spot, and their credit card information saved for them. Just think about how much gamers complain about having to buy games from the Epic store.

Transportation costs are not the only reason why businesses cluster. Agglomerated businesses can pool their resources. For instance, in my city, the tax dollars from the bars fund a free trolley that ferries tipsy patrons up and down the street.

Agglomerated businesses can pool resources on advertising. For instance they can run tv commercials and newspaper ads advertising “the auto mall” or “the furniture district.” Look at this advertisement for the KeyAutoMall. 12 different “competing” businesses teamed up to produce it. They even created a shared website. How does that make economic sense? AGGLOMERATION!!!

If you are making a platformer, don’t hate on that other studio that is also making one. They are not your enemy. Instead, reach out to them. Ask them if they want to pair up and you can bundle your games together and sell them at a discount. Someone who likes your game will probably also like theirs and vice versa. You two are like Furniture store A and B.

Pair up with 12 other platformers and ask Valve if they would be able to feature you all in a special event. Steam recently hosted the “Swiss Developer Sale” where a bunch of games made by Swiss developers got a special promotion. This wasn’t Valve’s idea, it was completely self organized by the indies in it and pitched to them. If you alone ask Valve to give you a front-page promotion they will ignore you. But, they are much more likely to say yes if you can organize a whole bunch of indies to have 1 big event.

You can view the page here.

Indies pool resources all the time. Convention booth space is very expensive but enterprising indies can split the costs and share the booth. That is basically how the Indie Mega Booth got started. Also back when we had physical conventions, indies usually shared hotel rooms and train rides.

I started writing about video games because I wanted to share what I learned with people who were also sharing what they knew. It was a way for me to make friends with them. It has been one of the best, most impactful career decisions I have ever made. I have made connections and gotten work from people that I would never have been able to without sharing what I have learned.

Sharing technical knowledge with the indie community is a cost sharing similar to how auto malls share costs when advertising. I know that if I give you some of my technical know-how you are likely to also share your technical know how with me. Together the costs of technology are distributed and cheaper then if we had spent the time figuring out everything on our own.

Partner with your fellow indies

Think of ways that you can share costs with your peers. Reach out to them on twitter. Promote your games together (even if they are in the same genre). Think of ways of splitting advertising costs or doing joint promotions.