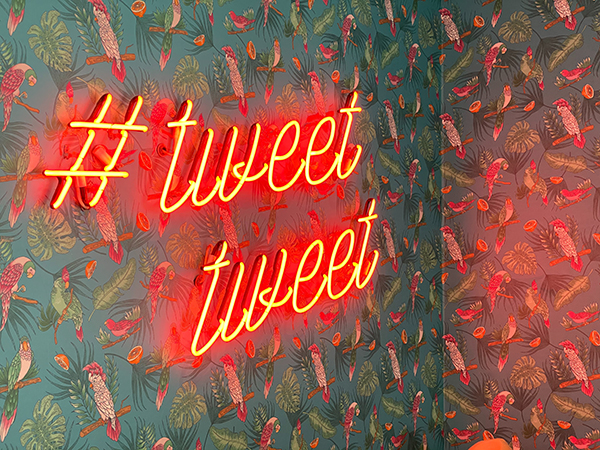 So last week I wrote a post about how to get more Twitter followers. The short answer to get more followers: Do cool stuff outside of Twitter and then when you get attention for that cool stuff, direct them to follow you on Twitter.

But there is one question that the whole post assumed, which is do you even want a big following on Twitter?

There are several problems with Twitter that make it not a very good marketing platform:

If your Twitter strategy is to build up thousands of followers, then, on launch day you tweet “Buy my game <link>!” hoping that all your followers will click your steam page and buy it, that probably won’t work.

Unfortunately, nobody clicks links on Twitter. Seriously, they don’t. Go back to the last tweet where you encouraged people to click something. Maybe you had a new store page, or you were featured in some festival. Click these lines that are located under every one of your tweets:

That button shows this popup. First, ignore “Total Engagements” (that is a fake number Twitter made up to make their platform look better).

Then look at the number next to “Link Clicks.” Then take that number and divide it by your follower count. In most cases that will be somewhere between 0.25%-3%.

Even if you “go viral” you can only get about 14% click-through and that is because your tweet was shown to folks beyond your core following.

The reason the link clicks are so low is because Twitter actively suppresses posts that link to external websites. It is in Twitter’s best interest to keep readers on Twitter so that people view their advertisements and collect their personal information. When it comes to leaving Twitter, they are basically saying “you can check out at any time but you may never leave.”

Other platforms such as Discord and Email marketing get much higher click-through rates (5%-30%.) Those platforms don’t make money by keeping you there so they make it easier for readers to click away.

Be careful about building too big of a following on Twitter at the expense of building a following on platforms that perform better such as Discord or your mailing list.

I know all your indie dev friends, all the journalists, and all the streamers you know are on Twitter. But that is a self-selecting “extremely-online” group. Most people have boring jobs as accountants, salespeople, cashiers, or are in food prep. They don’t use Twitter. Here is a list of all the social networks ranked by the number of active users (source)

Gamedev Twitter is very insular. When you tweet, most of the engagement will come from people in the business of gamedev, not from the average player who will actually buy your game.

Consider this example: This is the most engaged tweet by Devolver digital last month (According to SocialBearing).

Now look at the quote replys, and hover over each person’s bio. You will see that most of the replies are from people with bios that say “Video Game PR”, “Twitch Partner” “Content Creator” “Writer at <game site>” “managing <eSports team>”.

Devolver is the most well known and most mainstream of the indie publishers. If they can’t get replies from average gamers who are not in the industry, how are you?

So if the average game buying public doesn’t use Twitter then why even bother with it?

Twitter is still very very valuable, but you have to understand who the actual audience is.

When you tweet, you are not really talking to average gamers, you are broadcasting to the games industrial complex. Twitter is basically LinkedIn for video games. Twitter is a gigantic 24-7 Game Developer’s Conference. Your goal is to get the attention of the people who can amplify your marketing. Tweet with the assumption that Twitter is a 24-hour game developer conference.

Getting the attention of publishers

Many publishers employ “headhunters” or “scouts” whose job is to bring them interesting games so they can be signed before another publisher signs them. They are desperately trying to find good, interesting games. Their #1 source for finding these diamonds in the rough? Twitter. Here is an example of one such Publisher Scout

So use Twitter so that the people who are looking for new games find you. Post great looking artwork and gifs to #screenshotsaturday, #indiedevhour, #pitchyagame. Make sure your bio and website links are up to date. Make sure your pinned tweet makes it clear that what you post is for a game you are actively working on. Sometimes people post interesting gifs but they are just tech demos or little gameplay doodles. If you make it clear that you are posting content from a game that you are actively developing you are more likely to get their attention.

When you post, pay attention to who is liking your posts. Some headhunters are discreet as to who they are in their bio. By looking at their past tweets or doing a little googling on who they are can reveal who they work for.

But just because you get a “like” from someone who works at a publisher doesn’t mean you are as good as signed. Apply to those publishers with your pitch document. Your pitch can add context to that initial bit of interest that the headhunter showed you. They are much more likely to hold a meeting after they first saw your stuff on twitter

Getting special promotions from platform holders

Sony Playstation, XBOX, and Nintendo Switch all have content teams who are responsible for telling the marketing teams which games should get special features in the store, what games should have their trailer reposted on their official youtube channel and be tweeted about on the official account. The content team spends a lot of time on Twitter looking for new games. If you want to hear how this works, watch this talk by Nick Suttner.

Last year I reached out to a member of the promotion team at Switch to talk about my game 1 Screen Platformer. Despite having never talked to anyone at Nintendo, I was surprised when he said “Oh ya I know your game, I was actually showing it to some of my colleagues.” You would be surprised how widely your game is shared behind the scenes.

Before that, Nintendo never proactively contacted me, it was only by me taking the initiative to reach out to them that I heard that they were aware of my stuff. Typically what will happen is that if you tweet about your game a lot and then you reach out to them – they are a “warm” audience to your game. They hopefully will be vaguely aware of it and will say “oh ya! I have seen your stuff shared around, we would love to have a chat with you.”

Tools companies such as Unity, Unreal, and Gamemaker are looking to showcase developers who really know how to use their game engines to make amazing games. They want to promote your game for you so that they look good. For example: “look at this beautiful game! It looks like this because it was made using our tools!”

Use the associated hashtag with your engine: #madewithunity, MadeWithUnreal, #gamemaker. You want to get on the radar with the company’s development and marketing team because they regularly run promotions.

For instance every year GameMaker holds a “Made With Gamemaker” sale on Steam. To get your game featured in such a sale is mostly through personal invitation from GameMaker. It is in your best interest to get your studio’s name known by the development company.

Getting noticed by Streamers

They are always looking for the next game to play. Try to figure out who they follow and which hashtags they read. You can also determine the games they like based on what they post. If you see #ad that means they were paid to play that game. That is both good and bad because you can see what kind of engagement they get when they are paid to play it.

Gamedev is really hard and it is lonely. Besides promoting you own game, you should also be actively searching the same #gamedev #screenshotsaturday hashtags to find games similar to yours. Reach out to the developer and tell them you like their stuff. If you are developing using the same game engine share tips or workarounds and plugins helped you.

Don’t use these folks a step stool into better opportunities. Instead share what you know. If you just heard of a great festival, you should recommend they apply too. If you saw that they got a great promotion from a store, ask them how they got it. They might just introduce you to the person at the platform who got it for them.

Twitter is a giant virtual conference where the most important thing is to network with other people in your situation.

Journalists are the most avid Twitter users on the internet. Follow those who cover your types of game. Often they tweet out “Hey looking for some games to play this weekend and write about. Anyone have recommendations?” Jump on that.

Getting ahold of people fast

Sometimes you need to contact a specific streamer, journalist, or person who works at a company. The easiest and fastest way to get a hold of them is often to by respectfully tweeting at them. Please be nice. Don’t badger them if they don’t respond. Don’t be mad if they don’t say anything, they are busy and maybe they don’t like your stuff they just don’t want to tell you. But I find I get faster responses by tweeting a folks than finding their email and sending them a note.

At the start of this post I demonstrated that most “normal gamers” or “muggles” do not read Twitter. It is just too raw for them. There is just too much of it and it is a bit too bitter. Instead, most “normals” watch youtube streamers, read IGN, watch E3 coverage.

The content of these channels that the “normals” watch are put together by an entire of aggregators (Journalists, Streamers, Platform Teams) who are dredging the raw content from Twitter. This class of aggregators find the best of Twitter and give the public a summarized view of what they should be excited about.

I see too many game devs struggle with marketing on Twitter because they are trying to market directly to the “normals.”

Your goal with Twitter is to actually attract the attention of the aggregators so that they will show your stuff to the “normals.”

Tips for tweeting to the aggregators