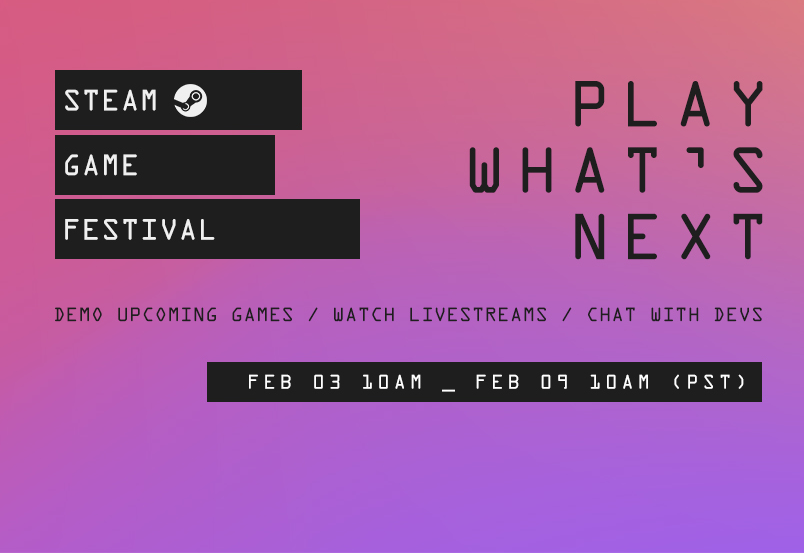 Valve held its third Steam festival at the start of February 2021. You can see it here. As with all festivals I tracked down as many devs as I could to share with me their game’s performance during the festival. How many wishlists, how many impressions how many visits. The goal here is to help us improve our game’s performance during the festivals.

My previous festival reviews can be found here:

For this Winter 2021 festival, I got 43 developers to share their data with me. Some developer chose to only share their numbers but ask that I not mention their game directly. If you see [redacted] in the charts that is me honoring their wish to hide their game name.

General thoughts on the festival

This festival felt as if Valve was trying to make the festival more egalitarian. In previous festivals there was an entire section head titled “Featured” but that was replaced with “Home” for this festival. Similarly, in previous festivals each genre page had a “featured” section and at the bottom was a “more” section which was essentially a bargain bin section. That page hierarchy is no more. Each genre page is now broken down by subgenre.

There is still a “highlights” area that has a sizzle reel of the most promising games curated by Valve.

This festival also introduced a more robust sorting and filtering section. The language

In this edition of the festival report I approached it with a series of questions and see if we could answer them.

What were the highest performing games?

Riftbreaker again returning to the top spot of the game’s I surveyed. Watch everything EXOR Studios does – they are a master class in marketing a game on Steam.

Here are the stats for the other games I surveyed:

Wishlists Earned During the Festival:

Here is the funnel of Impressions to Views to Wishlists for all the games I surveyed. Each blue bar represents one game, in each chart, their positions are locked. So the 3rd bar in each chart is the same game:

How was the Winter 2021 Festival Compared to the Previous Festivals?

In the following data sets I have compared the Median and Average for the 3 Steam festivals. 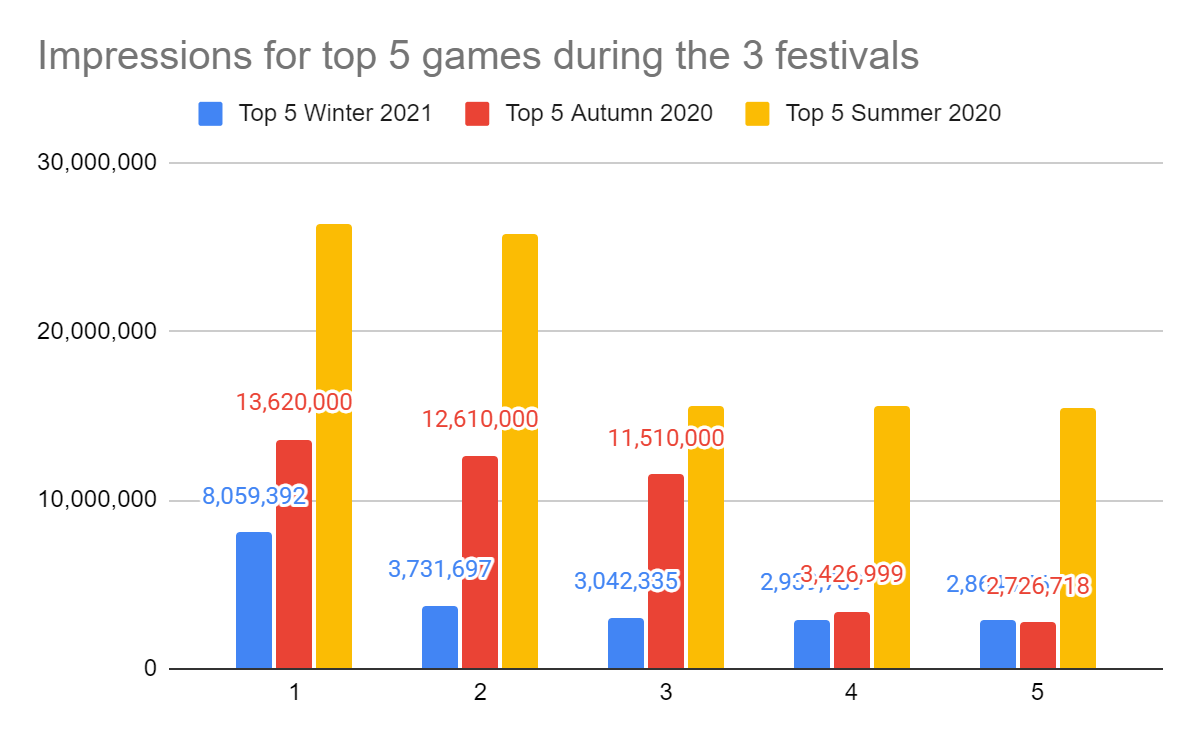 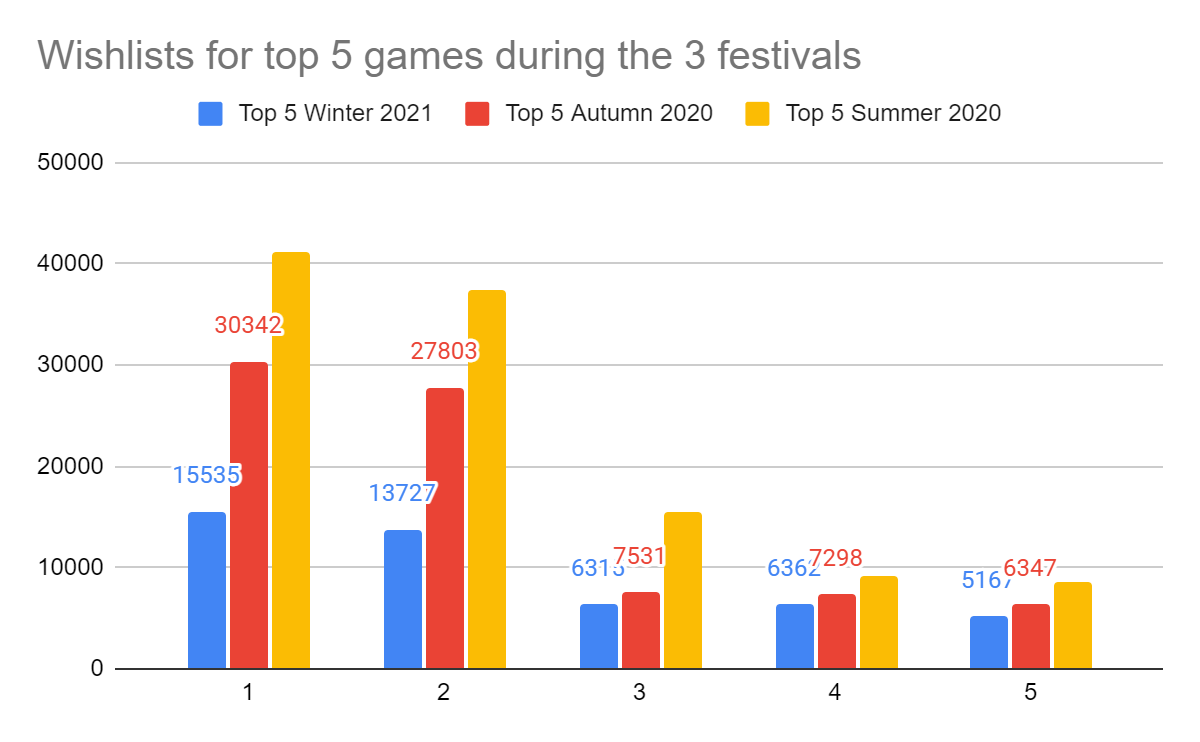 At first glance it is obvious that the top performing games are not doing as well as they were in the previous festivals. However, the median game is doing much better than previous years. Look at this: 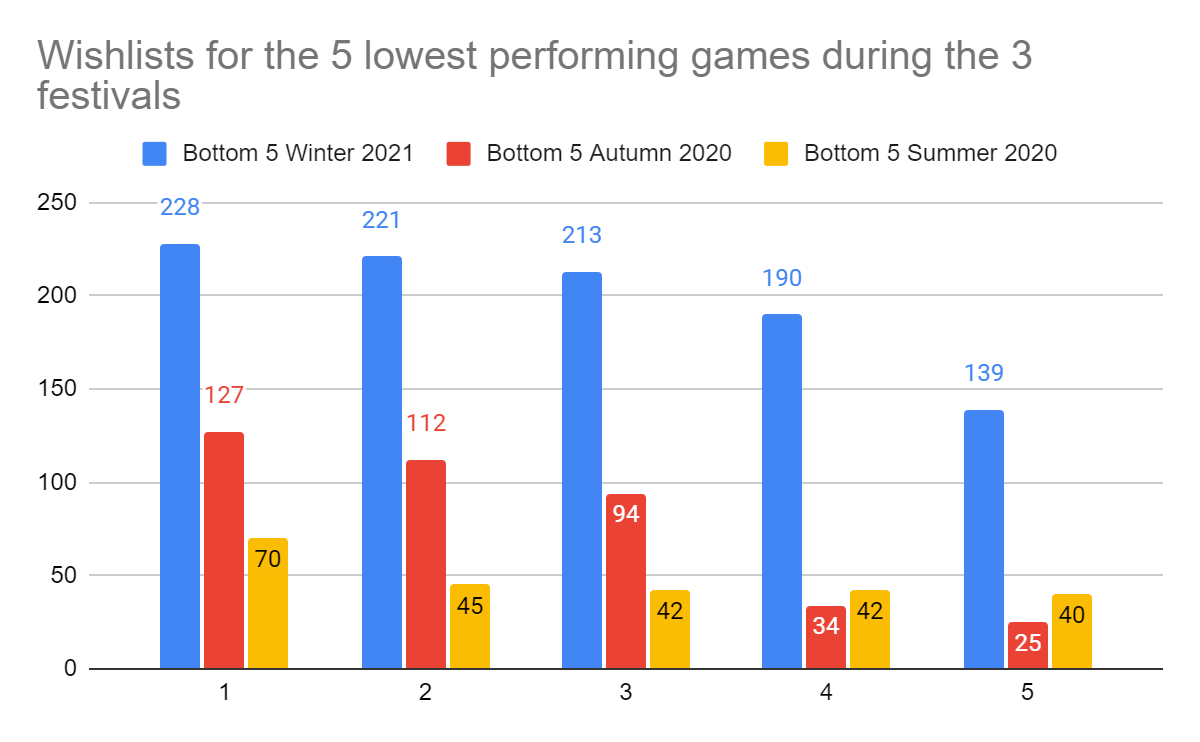 As mentioned above in the new section, it appears that the Steam festival is becoming more equitable. The top performing games are still earning a lot of wishlists but not as many as before. And the bottom earning games are doing much better.

Now maybe for this festival, the bottom earning games didn’t respond to my survey. However, 5 games in my survey were part of the first festival in 2020 and this Winter Festival. The bigger games earned fewer wishlists but the two smaller games (Exophobia and [redacted]) earned a lot more: 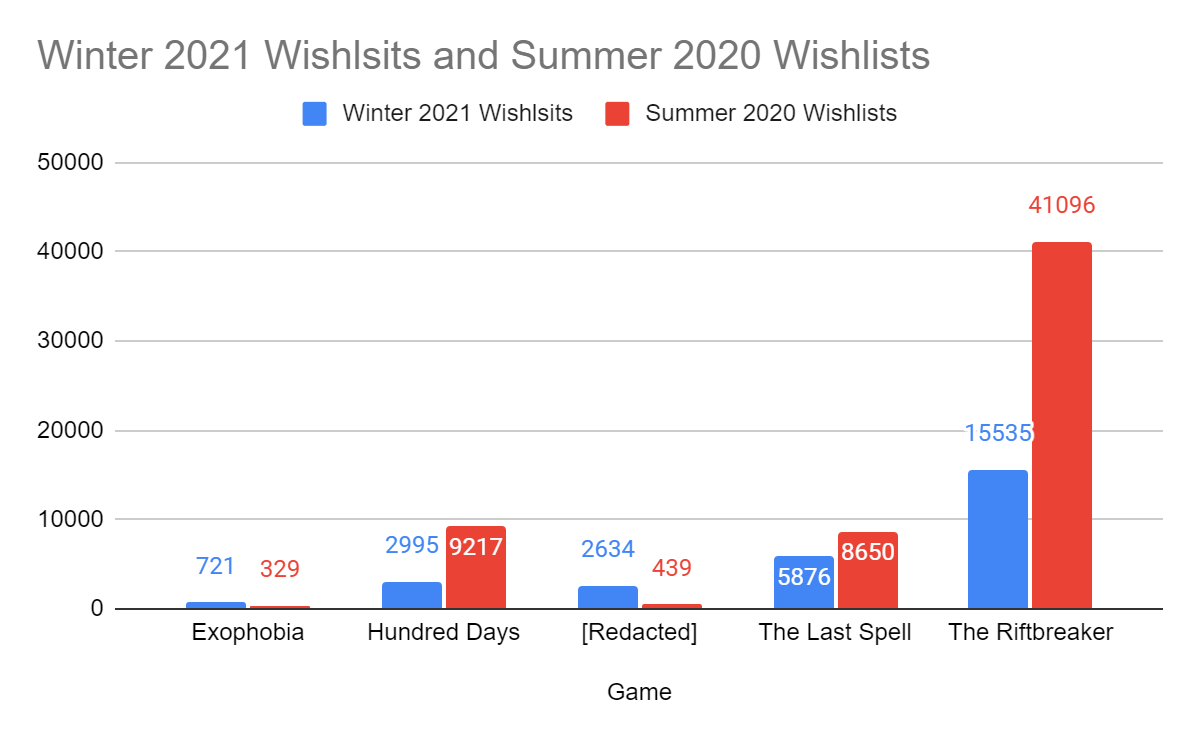 What is the most popular genre?

The Steam buying audience has a definite preference when it comes to genre. Every festival I like to look at ways of assessing this bias. This year, every genre section had a trailer with a sizzle reel of the games Valve thought were the most interesting.

They are just embedded youtube videos and therefore we can look at the view counts.

Here are the results. Note that Simulation didn’t have an embedded video (I think they forgot?).

Just as proven in previous surveys, the big genres are Strategy and RPG. Steam really likes slow, complex games they can sink their teeth into.

Puzzle was the genre with the least interest. In fact people are 4X more interested in RPGs than they are Puzzle.

So one of the biggest determinants of your success on Steam is the type of game you make. Mind your genres.

Does providing a demo increase or decrease wishlists?

It is a question as old as shareware. If you give away a piece of your game are people so satisfied by the free sample that they never wishlist / buy?

I asked people to provide the number of demo downloads and number of plays their demo had. Here is the chart for the number of Wishlists vs The Number of Demo Downloads.

As expected the more wishlisted games got more downloads. Also people were more likely to download a game than wishlist it. There were 3 big exceptions.

All three of these games had stunning graphics and were narrative focused. I hypothesize that people just are sold on the game just based on the visual and don’t need to play it to know they want it.

Yes, people downloaded the games but did they actually play them? That figure is not as easy to assess in Steam. You can estimate the number of plays by counting the number of concurrent players for each day of the festival but that double counts people who really like the demo and play it on multiple days. 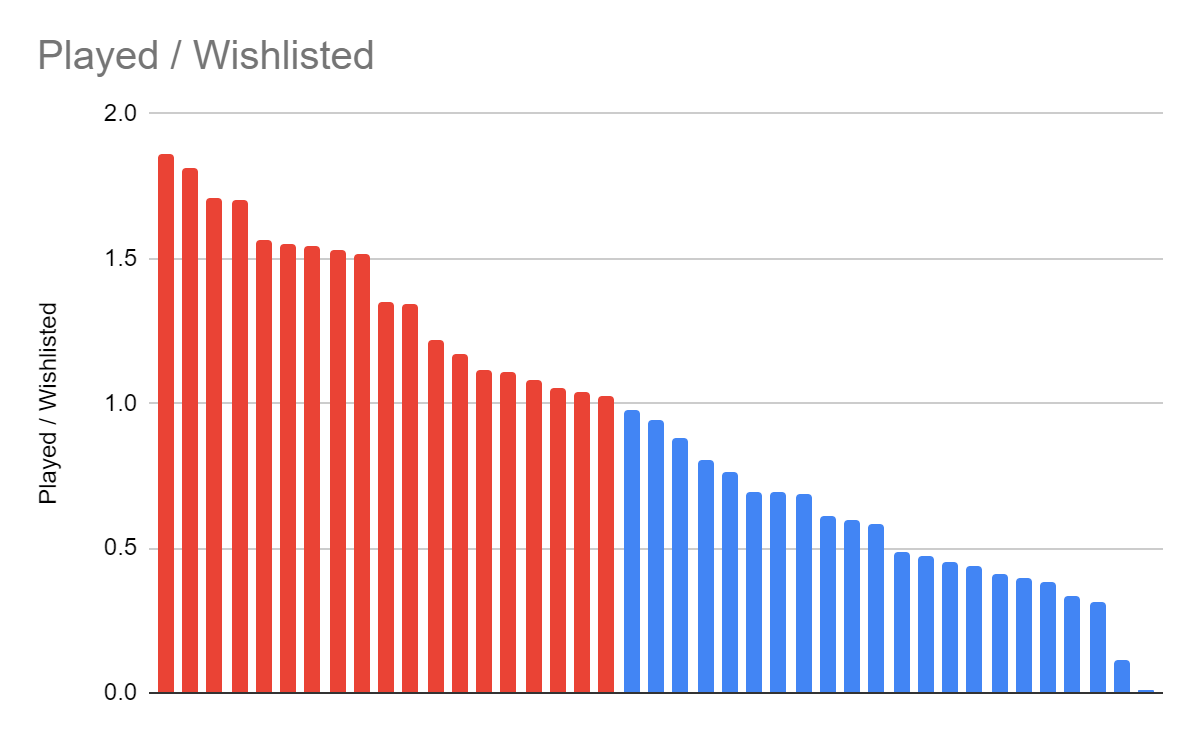 Weird right? I mean how could a game have more wishlists than plays? Wouldn’t people want to try out a game considering it is free?

Not necessarily. When I was doing my Steam Study from 2019 I saw people wishlist free games all the time. For some people, the act of wishlisting is just like a bookmark. It just indicates “looks cool will check it out later.”

What about the games that got a lot of plays but not a lot of wishlists? What is happening there? I think they breakdown into 2 categories.

My only advice here is check your demo play to wishlist ratio. If it is out of whack, consider not having a demo outside of festivals. You might be sacrificing sales by having a demo.

When should you enter your game in the festival?

You can only enter 1 Steam Festival per 365 days. So a common question many indies have is “Should I enter the first festival as soon as I can get a demo ready or should I wait and participate in the last festival before my launch?”

Based on the data I would recommend you wait until the last festival before your launch.

Now some of this speaks to the quality of their game, but I think it also has to do with positioning in the festival. Games with lots of wishlists got chosen to appear in the sizzle reels at the top of genre pages. There were special sections called “on your wishlist” which will get you more exposure if you are in more people’s wishlists.

In addition to just the raw the wishlist counts, you should wait as long as you can because you will have refined your game’s messaging, your art will look the best it possibly can, and you will have more fans.