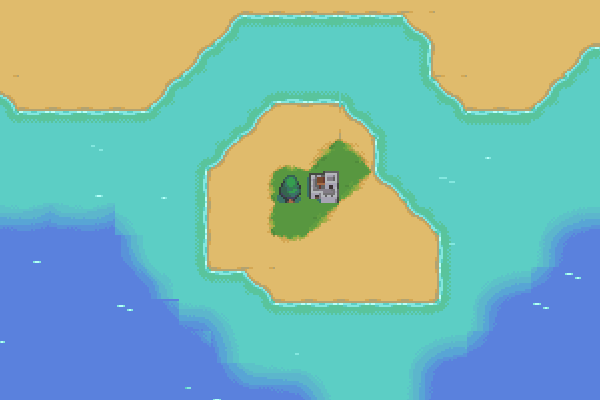 In the past couple of months a couple of big social media sites have changed their terms or introduced suspicious paid plans and it has caught content creators off guard.

For instance, last week Twitch introduced a new “Boost” program where streamers can pay to get more viewers to see their stream.

Every single year one social network or another pulls a stunt like this. Somehow people are still shocked when it happens.

It isn’t a matter of if, it is a matter of when. They don’t care about you. You must market your game as if the platform you are using will go away tomorrow and you will lose access to some or most of your followers.

My basic point: DON’T BUILD YOUR CASTLE IN LAND YOU DON’T OWN!

I got the pixelart itch again and have a blog to write so I thought I would combine the two. This week I created a little metaphorical fable about building your castle in other people’s kingdoms. I am using the amazing RPG tileset from Pita Madgwick to do it.

Your game studio is basically your land. You are the king. You can do whatever you want on this plot of land and kick out who you want, charge what you want. Set the rules.

Goal here: You want to grow from this little tiny hamlet to a giant castle. You also want a bunch of people in your kingdom living there (aka playing your games), and paying you taxes (buying your games) and telling you how brilliant of a leader you are (fan mail, fan art) and enjoying the company of your kingdom’s fellow citizens (community engagement).

That is your goal but for now you have no one in your kingdom. Your castle is tiny. But how do you get people to come to your crappy little kingdom?

You look across the sea and you see another country run by another King. They have thousands of people. Everyone is rich. The king is giving away land for anyone to build their castle.

So you cross the sea and build a castle in their land. The King doesn’t even charge you for it. So you decide to spend a whole lot of time building a big beautiful castle. Everyone is there. Thousands of people come into your castle built on their land. Your home Kingdom is neglected but why worry?

Then one day the rain dries up and the land isn’t fertile, and the king doesn’t do anything like invest in irrigation, and the infrastructure sucks.

People move away and that castle that you spent so much time building is empty. Nobody is around to visit. It sucks. Your castle looks awesome but it sits empty not because of anything you did but because the landlord messed up and everyone left.

So you say, no matter. Let’s go over to this kingdom where everyone is setting up.

You start a new castle! Sure you have to start all over but look at all the people! So you build and build and build. Your home Kingdom is still neglected but who cares! Facebookia is awesome!

Then one day. The King of that land puts a giant wall around their kingdom. Even though you helped make his kingdom worth living in, you are not allowed to enter your castle. In fact, the King starts charging you a toll just to enter your own castle to talk to the people who are there! Why oh why did you spend so much time and money on this castle?!?

This happens every single day.

But there are thousands of variations

A hoard of racist barbarians invade and nobody wants to visit your castle anymore because the king turns out to be a total creep and everyone is scared off because he just lets the racists hang out. (See Twitter and Facebook)

The kingdom gets absorbed by another neighboring King that has no idea why people where there in the first place and starts changing the laws and everyone leaves. Example: Tumblr

There are countless tales of this happening. EVERY SINGLE EXTERNAL KINGDOM will do this to you. No matter how “cool” or “hip” they are right now. They will let you down.

So what do you do? How do you possibly fix this? Here are the rules.

Rule #1: Build your castle on land you own

Your kingdom is a platform that you own:

But wait? You mailing list is hosted by Mailchimp which is another company, and your website is hosted by GoDaddy or Squarespace? Aren’t they evil kingdoms too?

Not really. They are just hosting platforms that are invisible to your followers.

The general public doesn’t have to go to Mailchimp.com to read your newsletter or squarespace to view your blog. Your readers go to your domain.

If any of those companies changes their terms in a way that you don’t like, you can migrate to a new hosting platform and your followers will never have to change their behavior. They will still go to the same URL to get to your site, they will still receive your newsletter from your email address. It is completely transparent to them.

Spend more resources on the castles on your land.

Rule #2: SHAMELESSLY USE THE OTHER KINGDOMS JUST LIKE THEY ARE USING YOU!

I know Tiktok is the hot social media platform right now. It is so pleasant! It’s not like that last kingdom twitterlandia! All the cool kids are here! It is fun! There is dancing! And the traffic is huge!

But just like Facebookia and Myspacia something will change with them. It will. It almost did already.

Your solution? Use them so hard. Don’t fall in love. Try to get every last follower off of their kingdom and back to your kingdom. Be shameless about it.

It is true, you cannot get visibility without them, but don’t rely on them as your home base. Instead build the minimum following necessary. You are basically building a Potemkin Castle.

Don’t feel guilty posting a Call to Action of “Join me on my mailing list.” You have every right to get people who want to hear from you out of their kingdom and into your kingdom. Don’t let people shame you that you are being to “salesy.” F**k em. You need to get people out of enemy territory and you gotta be clear. ALWAYS HAVE A CALL TO ACTION.

Basically build a big tall temporary tower in that foreign kingdom that is loud and garish and attracts a lot of attention. When anyone enters you say “oh to really follow me, go across the sea and join my real kingdom.”

Always try to build this bridge from a rival Kingdom back to your home Kingdom. Basically, when using any social media platform always ask yourself “How can I enrich my own kingdom with the people of this other land?”

When constructing your path see my next rule…

Rule #3: Always move people back to your kingdom, never to another kingdom.

UGH! You went from Youtuberia to Discordia! Neither of which are owned by you.

You are just sacrificing a bunch of traffic that could have been your own and you are giving it to another King who can take it from you.

Always try to get people to follow you back to your kingdom.

Why oh why are you spending time and money on a bridge that helps these two kings while neglecting your own land?

Rule #4: Operate like your castle can get shutdown tomorrow

Do you have a huge following on Twitter? Is everyone who would buy something from you following you only on Youtube? What would happen if tomorrow Twitter didn’t exist? Or Youtube? How would you communicate to them? Do not over-invest in one platform. Always try to get them back to your kingdom.

Don’t wait until it is too late. From the first day you start in that rival kingdom you should be pushing followers back to your home kingdom.

Yes you can still build a little castle in their land, but build a cheap one that you can afford to lose. Then you should stand on the top of that cheap castle and say “follow me over there!” as you gesture wildly to platforms owned by you.

Rule #5: Be suspicious of new kingdoms that give away easy visibility

Just about every 2 years there is some new “hot” social media site where you get tons of “engagement” and followers come easy?

The new guys are most definitely going to let you down soon.

Here is why. Social media platforms are capitalist enterprises and they are trying to steal market share away from rival social media sites. They are giving away so much free visibility, free engagement, cheap paid advertising to screw their rival social network.

This is temporary. The party won’t last. They will eventually decide to stop giving away traffic and decide to monetize their subscribers (meaning charge you to reach your fans).

Right now I see there are 2 platforms that are new and very risky.

My recommendation is yes, try to go viral on TikTok then make a CTA to follow you on your mailing list. Also don’t set your profile link to a LinkTree (that is another platform you don’t own!) Instead, link to your own URL that is designed to quickly shuffle them to where you want them to.

Yes everyone is on Discord right now but the company is still privately held and doesn’t have a solid business model yet. Also concerning is that they are explicitly anti-ads. I know it sounds good to be anti ad but that means they have no clear way to monetize. That means they could stagnate without any clear growth model and a more aggressive rival will take market share from them (this is what happened to Myspace when Facebook showed up.)

Discord is also run by a small company relative to the amount of mindshare they have. This means they are ripe to be purchased by a bigger company. And when a big company takes over, we will always get screwed by the changes they make (Just look at Tumblr and Instagram and WhatsApp and Twitch for examples of this).

Rule #6: Give good reasons to go back to the Castle in your Kingdom. And be persistent!

It is hard to make people leave a social media site. But you need to work hard at it.

With every single person who enters your castle in a foreign land, tell them “welcome, yes my castle is nice here, but did you know I do better stuff over there in that Kingdom across the sea?”

Always be working to get people over to your land.

Use lead magnets to entice people to follow you back to your kingdom. For example

You also need to be persistent. This isn’t a one time thing. Every week you should be telling them to follow you back to your kingdom. It will be slow, but building a TRUE following takes time.

I am not the first one to point this out: