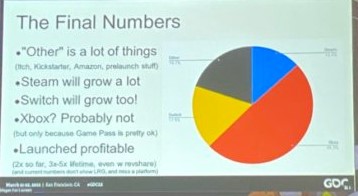 This was a talk by Megan Fox.

Description: A single-person game and, based on community response, gradually scoped it up to a larger game- all the while laying down deals and picking marketing venues so that we knew we’d launch already profitable. Half SkateBIRD post-mortem, half hopefully useful information you can use to plan your own expanding next game, come and experience the joy of what it’s like to develop and market a game rapidly expanding beyond your faintest experience while falling backwards down the stairs.

CZ Side note: Really watch out on the recoups from publishers because it meant Spartan Fist couldn’t help them.

SkateBIRD – they focused on marketability first

By launch their marketing had improved

How did you get the announce before the Kickstarter? – Cute skateboarding bird is a good sale. A good game for the right audience. The package made it looked really very formal.

Announce didn’t go viral until the Kickstarter – that is when they actually when viral.

Before Kickstarter, early access launch – you make it look like a complete fun game that looks like it could release tomorrow. But the fun was clear and the action looked good. But the playable version of the game wasn’t ready. It just looked great.

Where did they go viral

Festival wishlists raised their numbers and the ratio of Followers to Wishlists were 10.