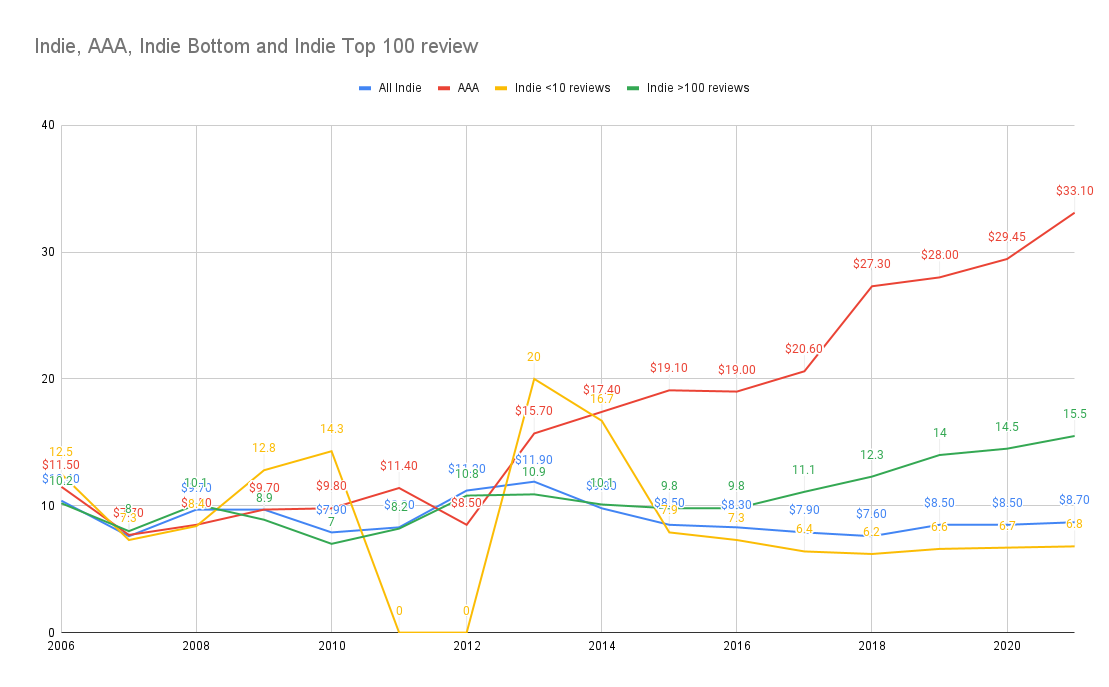 In last week’s blog post I wondered, Are Indie Games Too Cheap? The basic finding was that AAA games keep rising, lower end Indie games are holding steady and upper tier Indies are consistently about ½ the price of a AAA game.

Here is that in visual format.

So let’s say you are getting ready to sell your game and you are trying to pick a price. You are a good indie who wants to push the price upward, what should you do?

Here are 4 tips for pricing your game.

#1 Nobody on Steam buys games at full price

They just don’t. I know you could say why this is bad, but it just is the reality. Part of the reason is that Steam has built the algorithm around discounting. When you discount by 20% or more, Steam will send an email to everyone who wishlisted it. That keeps you front of mind. Even if they don’t buy it, they will remember your capsule. One day they will buy.

If you are lucky enough to be eligible for Steam featuring in the form of a Daily Deal or some other promotional popup, You are required to discount it quite deeply to get that Valve featuring. No discount = no special featuring.

Now you might consider yourself a true indie who isn’t going to stand for the race to the bottom pricing. You are going to make a principled stand and write a bunch of all caps tweets about how this is wrong. You think that if you make the stand then customers will learn that you are never going to discount and they will blink first and buy your game at full price instead of waiting 6 months to save $3.

I know it is stupid for them to wait, unfortunately, they won’t blink. Steam shoppers barely remember you or your game, they most certainly aren’t going to remember that you made a solemn promise a year ago never to discount your game.

I am sorry, you will have to discount your game.

So when setting your price, add 20%-30% because you are only going to sell your game when it is discounted. That is just the reality of things.

Then create a google sheet with the following columns:

To find “community reception” look at the reviews for each game. Are people not recommending the game and saying “not worth the price” a lot? Note that down.

After you have done this for about 10 games you should have a pretty good sense of what “comparison” games are selling for.

Now if you think Indies are underpricing their games, charge 20% more than games that you think are “equal to mine.”

Side note, if you want to sound like you know what you are doing, use “comps” in a publisher pitch meeting or in a Discord.

Remember how people only buy Steam games on sale? You need to see how those games are discounting themselves.

Go to the SteamDB page for each of your Comps, click the “Price” column then scroll all the way to to the bottom.

Look at this graph.

Look to see if the game increased or decreased in price. Look at how often it was discounted and by how much.

Look to see what their lowest price ever was and how long after they launched their game did they wait before discounting to that price?

There is this old marketing axiom that goes something like “If nobody complains about your price, you priced it too low.”

You will make some people unhappy with your price. That is ok. Not everyone is going to like your game that much. That is ok. If everyone thinks your price is just right, you are probably the cheapest game in your genre.

So, don’t feel bad if your game gets reviews like “It’s an ok game, but I would wait for it to be on sale before you buy it”

Remember point #1? EVERYONE buys games when they are on sale. So this guy is telling you exactly how Steam works. You are just like all the other games.

In short, pick a price that is comparable to other indie games and then charge 20% more.

If people are really really excited about your game, charge 50% more than you think you should.

What are the signs of a highly anticipated game? I defined some of the signs here in this blog post under the section “Signs of Excitement” (link)

Dylan Gedig designed the HIGHLY ANTICIPATED game Peglin and was struggling when he was picking a price. He went a bit higher than was expected with a $19.99 price point for an Early Access Launch

Here is how he made that decision:

1. We figured a higher price would help slow our launch down to something that was a bit more manageable. At the time I was still the only person working full-time on the game and we wanted to spread those sales out throughout our EA period and up to the full release, to help give us time to bring the others on full-time and scale up if needed.

2. We were expecting the launch to be about 1/20th the scale that it ended up being. I figured we’d convert around 10% of our WL that we had 2 weeks before launch. A chunk of players that had already put 10+ hours in the demo and would happily pay that much for 3x the content.

3. We were really worried about the prices of everything shooting up around us. Gas prices had doubled and food pricing had started to go nuts around us the month before our release. We wanted to make sure that those initial sales would allow us to continue working on the game without me having to get another day job to pay the bills. It’s possible that a Kickstarter would have been a better option here, and would have avoided some of the negative response that we got to our pricing, but I don’t like the way that Kickstarter saps a lot of oomph from your Steam launch, and we didn’t have the manpower to really push a Kickstarter to be successful.

4. Our main competitors were all priced at $25 so it was still a bargain option for us (though many of them started at $15 and worked their way up, which might also have been a smart idea for us but contradicts point #1). AAA prices had also started to push for another price bump which heralded that it was probably a good time, but of course I wish that had started a little earlier so we weren’t the ones pushing that threshold.

5. It was important for us to use our platform to help prevent an indie race to the bottom like as happened in the mobile space. I worked on F2P games for my day job while starting Peglin and it was soul sucking, I would hate to see that happen in the PC space too.

Now having read this blog and my post last week about games being too cheap, I hope you see that you should be trying to push your game to be just a bit more expensive than you are comfortable.

However, a couple months ago I wrote that there are times to go super dirt cheap. I know it sounds contradictory and confusing. If your game is super experimental, has a tight viral loop, and would appeal to streamers, and you didn’t spend some time on it, it might be worth doing the super discount strategy. The reason is that you are going to use Streamers as your primary marketing strategy. Viewers seeing the game and seeing how much fun the streamer is having is likely to say “Heck why not?! It is just $4 and buy it right away. That bulk purchase makes up for the relatively low per-unit price.