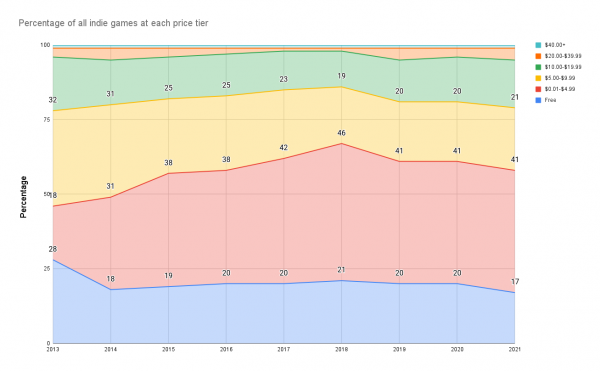 The other day I was wondering if we really are selling indie games for too cheap. Using the Steam Analytics over at VGInsights I found the average price for every game released every year since non-valve games were allowed on Steam (2006).

So what does it show?

Way back in the day Indies and AAA games were priced the same! Then in about 2012 AAA games raised their prices a LOT. Right now the average AAA game costs $33 on Steam. That is basically a 400% price increase in 10 years!

Now if you factor in inflation, just to stay level with 2012 prices, indie games should have an average price of $11.61!

Is it because of asset flips?

Before we blame anyone let’s dig in a bit.

The above chart factors in games that are free. Indies are more likely to give games away for free.

Because of asset flips right?

No. It is a cunning guerilla marketing trick indies are smart enough to implement. It is turning the tools against Steam. If you put up a free demo as a standalone game and call it a prologue, you get free visibility! It is a helpful strategy and I wrote about how prologues are used to earn tens of thousands of wishlists here.

Also, some indies release bespoke experimental games that are their MFA thesis projects for free on Steam. Some of them do very well visibility wise – like this really interesting one called With You.

Let’s look at how many free games are released per year by Indie vs AAA studios.

See! Look at all those free indie games.

Note that I start the graph at 2013 because 2012 was the start of the Greenlight era where Steam stopped being curated. Before Greenlight Valve wouldn’t have let you release a free game.

So basically all these free indie games are bringing down the average.

But I don’t think we should look down our nose at free games and consider this a problem. As I noted, possibly getting tens of thousands of players to try out your student game is great!  The prologue strategy is great for visibility too!

Also, don’t say “That is what itch.io is for!” Listen I love itch.io but the audience isn’t that large. I wish mainstream gamers would play more experimental games. If we only upload experimental games to itch, those core gamers will never see them.

So, I don’t think free games are the enemy here.

SO it IS because of asset flips right?

If I filter out the free games, here is what the average price of a Steam game looks like for Indie Vs AAA games.

Same story, but the average indie game price increased by $1.

So why can’t Indies do what AAA games did in 2012 and increase their prices?

The creator of VGInsights had some… well insights on this. Here are his thoughts.

The 2012 onwards is a better predictor as some of these games have been discounted after 10 years.

It shows how Steam used to be an afterthought for some major publishers. They released their games on Steam as well, but at lower prices Vs console. And steam revenue mix was small.

Basically 10 years ago, Steam was the dumping ground for AAA games. AAA treated Steam like the bargain bin at the back of a GameStop. Then they realized they could make real money from Steam and started increasing the prices.

For instance, in 2012 Supreme Commander: Forged Alliance launched at a 50% discount and then within 6 months discounted the game down to 75% for a total price of $3.74  Chart from SteamDB for Supreme Commander

Maybe it is time for Indies to do what AAA did and start raising their prices?

So conclusive proof it is asset flippers ruining Steam! Right?

So asset flips are typically super cheap games that nobody buys making Steam shoppers ignore us?

Well, Valve clamped down on the asset flip practice in the 2017-2019 period. One of the big algorithm changes was your game gets almost no visibility if you have fewer than 10 reviews. I wrote about this algorithm rule here.

Side note: The yellow line is the low end indies and the line kinda goes bonkers in the 2011 to 2012 years. There were so few games on Steam back then that no games earned fewer than 10 reviews.

So as you can see from the data the low end (sub 10 review) games prices have stayed quite low and aren’t rising.

BUT the higher quality games that earn over 100 reviews are actually raising their prices.

There was a time back when everyone was complaining about the indiepocalypse that the flood of games was going to cause prices to plummet. But this graph shows that this isn’t happening.

For high quality indie games, prices are going up and have been pretty consistently 50% of the price of AAA games.

But they could be more expensive!

So let’s look at all indies (even the ones that didn’t earn 100 reviews) and what proportion of them are at every price point. Here is that data graphed per year.

This is a stacked area chart and these always confuse me for a little while before I switch my brain over. To read it, consider that each data point is a percentage. Just think of every year as a pie chart stretched to be a vertical line. So in 2018, 21% of games were free, 46% of games were less than $4.99 but not free, and only 1% of indie games were $40 or more.

So last year, 62% of  non-free indie games were less than $10. That is probably where the biggest room for improvement is.

Maybe we should think about pricing differently

One thing to remember though is that Steam is a AAA market and a top-tier indie market AND an amateur market. Some of the games are not good because they are a developer’s first game. We should think of Steam as a pipeline. Sure your first game might not sell great, but earning a bit of money might encourage you to try again on your second game, and your third and your forth. Then one day, you make a really good game that you can charge $40 for.

The biggest problem I see is not price, it is the fact that indies stop making games after their first one. This is a graph of all studios on Steam. 75% of studios have released 1 and only 1 game. That is 38,065 studios who didn’t make a second game. That is the bigger problem, not the price of games.

I think the major cause of this sharp drop off is that indies spend way too long making their first games. It is impossible to earn enough (no matter what the price is) if you spend years working on your first game. I am afraid if we say every indie should sell their game for $20, indies are going to spend even more time needlessly-polishing it, adding unnecessary content to justify charging a higher price.

I like the idea of your first amateur games being quick 3-month projects that are a little janky but because you are just learning. When making subsequent games you get better and better. Indies must release more games to get better.

So maybe we should re-think how we decide whether average prices are going up or down and instead consider the price per year worked.

Maybe you set a goal of “I am going to release $20 worth of games per year.”

If you are just starting out, you should be making faster, smaller, jankier games and selling them for $5 each. Try to release 4 per year. Your total output is $20 per year of work.

If you are an experienced indie developer who works on very polished games, you work on a game for 2 years and sell it for $40. Your total output is still $20 per year of work.

If you look at Sokpop’s combined value per year worked, it is better than some AAA studios!

We need to start looking at Steam as a pipeline of talent. Yes we should charge more for games, but there are many games that are only worth $5. That is ok. They are good for small studios that are releasing and learning. They are building up a community on Steam. The studio that does ok with a $5 game will one day work on a more ambitious game and sell it for $25. But if they fail and only make 1 game, there never will be a second game to charge more for.

Maybe another good metric to look at is how many successful games can we as an indie community can launch that are at least $25.

For more information on how VGInsights classify a AAA vs AA vs Indie game, check out their methodology here.

How to price your game

Check this blog post called 4 tips to help you price your indie game. It will give you some ideas about what to consider before you pick your price.