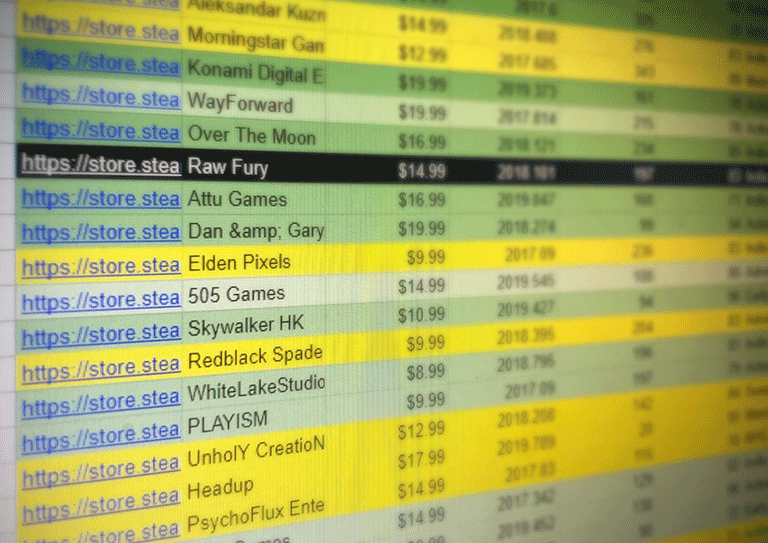 My last game Return of the Zombie King was released just over 1 month ago. I am about to ship some new holiday content for it but I am already in pre-production for my next game.

Let me walk you through what I am doing.

First step: Is my genre viable?

So for my next game I am considering going with a 2D, side-scrolling, Rogue-lite. I have never been that big of a fan of the genre, – I liked Rogue Legacy but haven’t gone much deeper than that game. So I am looking at the sales numbers for all other 2D side scrollers.

Ya ya, I have played Dead Cells. Ya I know about Spelunky. I am studying them. One thing you will discover about the indie community is the big “thought leaders,” or the “darlings” aren’t necessarily the biggest sellers. I am looking for little games that WAY over perform.

For instance look at this game. Dungreed

I have never heard of it. It looks like some dumb pixel art game that gets released every week on Steam and gets like 5 reviews. (Nothing against the developers – I like that look – but it looks like every other pixel art game out there) But looking into the numbers on Steam it has made only about ~$5000 less than Sunless Skies!

Ya that SUNLESS SKIES!

It has also out-performed such indie superstars as Downwell, Vlambeer’s Luftrausers, Desktop Dungeons, and Minit. The other kicker is that the Dungreed guys didn’t even have a publisher. They didn’t have to split anything with Devolver.

There are so many other hidden gems like Dungreed. Look at these other no-publisher-having no-fanfare-garnering, no-indie-festival-winning games. Some of them don’t even have the highest quality graphics. They just like show up, get the job done, and move on.

When you look at the numbers, not the hype, you find amazing gems like these. It cuts through the noise and gives you something to work with and compare.

So how did I get these numbers?

Developer Danny Weinbaum recently published a great blog on Gamasutra looking at different genres across Steam. The analysis is good but he also linked to the source data which is a 41,589 line google doc containing nearly every game on Steam. The earning estimates are based on the Boxleiter / Jake Birkett method of estimating sales. Even if the estimates are a couple percentage points off, they give you a good idea of the magnitude. I am mainly interested in whether I am a game that made 4 figures or potentially 7 figures.

Why look at this?

My goal is to look at the other games that are in the same sub-sub-genre. I want to see how much they make on average, what the quality level of the over and under-performers, and  to do some hands-on playtesting of the games so I can see what the genre tropes are and what the die hard fans expect. Furthermore, I want to talk to the fans and haters of the games to see what they like and don’t like about them. I also want to analyze the marketing strategies of the developers. Deep discounts? Streamers? Bundling? Strong community building?

Part 2 dial down the data

As I mentioned, I am considering creating a 2D, Side-Scrolling, Rogue-like. So I gotta take 41000+ rows down to just the roguelikes.

I go over to Danny’s data set linked here and export it to a CSV file so that I can work with it in Excel. Google docs does an amazing job with a file that large but it is very slow and I want to do some serious filtering.

This results in a new sheet with 734 rows on it. That means Steam has only 734 rogue-likes. That seems like a number that is at least understandable by humans. But I wanted to filter this down to just 2D games. So I ran the filter again on 2D tags.

So I ran some Excel formulas on the earnings columns.

That gives me a ballpark figure as to the potential for this sub-sub genre.

Total time it took me to do this filtering process (including searching through youtube and trying to figure out advance filtering) was just over 3 hours.

I have wasted that long just trying to get a shader not to throw graphical garbage on the screen. This is the real research that will tell me whether it is worth it to actually undertake this as a genre.

Qualitative analysis of the cohort

Now that I know the numbers, my next step is to identify a handful of key games in this cohort. I am looking for key types of games

From this cohort, I will start playing them to identify commonalities.

After that I will be looking at the player reviews, reaching out to interview any of the reviewers that had good insights, then  trying to reach out to the developers of the game to hear how development and marketing went.

Stop with all the analysis

That sounds like a lot of analysis but I am going to timebox it to just 1 hour per game. There is definitely the risk of analysis paralysis. Spending too much time on analysis does not make the game any closer to getting done. So it is much better to start working on the game once you have a basic understanding of the landscape.

If you have played any 2D Platformer Rogue-likes or have made one or know someone who has, let’s get in contact.