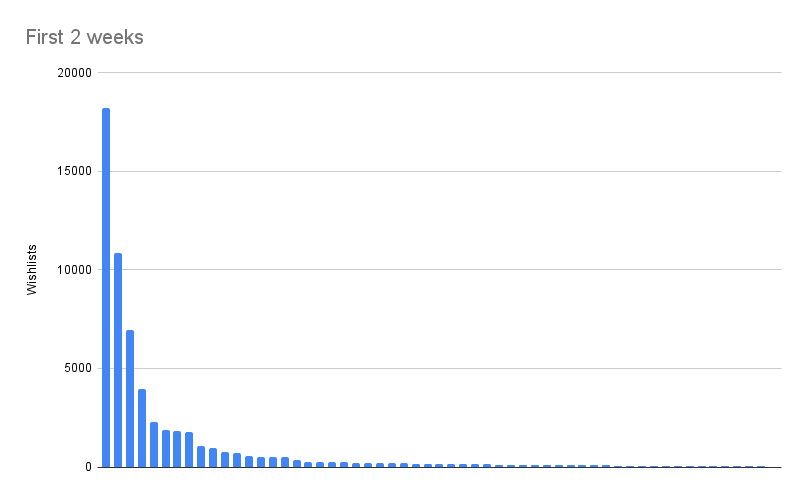 This is post is part of my benchmarks series where I look at what you can expect at various stages of your games development.

As you know, it is very important to launch your game’s “coming soon” Steam page at least 6 months (even better, 1 year) before your game’s launch so that you can slowly build interest and collect wishlists. When you launch your “coming soon” page, Valve actually gives you a little bit of visibility.

But how much? What is normal? If you launched a “coming soon” steam page did you do well or average, or do you need to rethink your game’s marketing?

Let’s take a look. Last year I collected wishlist data from 60 games that varied from triple-I studios making games perfectly tailored to the Steam market, to established indies working on their 3rd game, down to first time indies. In this week’s blog I compared their numbers so you can assess how your launch went and what the top-performing games did to improve their numbers.

TL;DR What is normal in your first 2 weeks?

Here is a graph of what all the games looked like ranked by number of wishlists earned in their first two weeks:

In my survey, 44 games had launched. I the following chart I graphed how their 2 week coming soon page launch compared to their revenue.

Look at this chart. You can definitely see how the Diamond tier games have huge coming soon launches. Gold tier also does quite well with several 2-week launches with over 1000 wishlists.

However a couple of games in my survey were definite diamond tier games that earned over 1 million dollars but their coming soon page launch was quite meager. One million dollar seller launched their page and earned fewer than 30 wishlists in their first two weeks.

Next, I looked into each game along this spectrum and realized at each level, many of the games had the same things in common that partially explained how they performed. In the rest of this article I will explain what I found.

Games in this tier earned between 25-148 wishlists in their first two weeks on Steam. Compared to the other games I analyzed I consider this “underperforming.” Here are some of the reasons a game might be underperforming:

Unpopular genre – The type of game you make is the most important decision you can make when marketing your game. Steam shoppers like some genres more than others. It is just a fact. Unpopular genres include puzzle games, match-3, platformers, couch co-op, vr, and kids games. If you want more information on what genres Steam players like, check out my article here.

Bad graphics – Looks do count on Steam. Players buy games based on how good they look. Your game doesn’t have to be photo-realistic, but it must look like there is a consistent, intentional, and interesting art direction.

Unprofessional capsules – In this tier, I commonly saw games that had capsules that didn’t look professionally illustrated or had title text that looked like it was done by someone without a background in graphic design. The capsule is your most important marketing asset because more people will see it than any other thing you create. It is your first impression to potential buyers. If it doesn’t look professionally done it will have the same effect of showing up to your first job interview in cargo shorts and a dirty t-shirt. You MUST have a high quality capsule and title text that matches your game’s genre. I know they can be expensive, ($500-$700) but it is worth it. For more information on why improving capsules is so important read this article I wrote about it.

Low-quality Steam page  – Games with low initial wishlist rates also had screenshots that didn’t properly illustrate their game. It either had screenshots that looked similar (indicating the game had very little content) or it was hard to see what genre the game was. Games in this tier also usually lacked gifs that showed off cool explosions and animations.

If your game earned fewer than 150 wishlists in the first two weeks I would be concerned. It is time to take stock and truly think about the future of your game. This is an indication that there is something that is not connecting with the Steam audience. Look at the type of game you are making. Is it in one of the unpopular genres on Steam? Maybe your graphics just aren’t interesting to Steam and it is time to hire an artist or change art direction.

If your graphics and genre are competitive on Steam, maybe you should try a new capsule or have someone review your Steam page. Maybe it is hard to understand what type of game you are making and you need to improve the messaging.

Yes I am being blunt here but even if your game’s “coming soon” launch did not meet expectations, don’t fret. This lackluster start isn’t on your permanent record! In several Q&As the folks at Valve have explicitly said that the algorithm does not flag your game as “bad” and hide it if your “coming soon” launch was bad.

In fact, I know first hand that a game that earned only 106 wishlists in the first two weeks turned things around and launched with incredible sales, was played for hours by streamers, and they now sits at over 1000 steam reviews.

You can improve things, you just have to step up your marketing game.

Games in this tier earned between 150 and 269 wishlists in their first two weeks on Steam. I call this tier of game “natural” because I think if you have a decent looking game and it is in a genre that Steam shoppers favor, the algorithm will organically share your game at about this rate.

The games I saw in this tier also had good capsules, their genre was popular on Steam (strategy, RPG, Action RPG) and their graphics were decent.

The developers in this tier did not have any previous games and so were typically starting their marketing off with 0 following. Their marketing outside of steam was not particularly large which is why I consider this the algorithm’s “natural visibility.”

Games in this tier earned between 270 and 965 wishlists in their first two weeks on Steam. These games had all the qualities that I mentioned in the “Natural Visibility” tier (good graphics, good capsule, right genre) but they had 2 very slight advantages that pushed them to higher wishlist rates. Those advantages were a good hook or an existing audience.

Good Hook – Games in this tier often had a very unique hook that caught on with audiences. The hooks were typically funny and had a good gif and were easily reshared on social media. These games are the ones that when you see them you mutter under your breath “Damn! Wish I thought of that.”

Existing Following – Some of the games in this tier didn’t have an amazing hook but made up for it with an existing following. A couple of the developers here had previous games or had run a successful Kickstarter, or were already popular on YouTube. In marketing speak we call this “owned media” because you worked hard to get people to follow you and essentially “own” the right to reach out to them on a 1 to 1 basis. If you have a clear call to action you can activate your followers to hit that wishlist button.

In this graph I highlighted every game that is made by a developer who had previously released a game on Steam.

Look at how many of the top earners had previous games. Now part of this is correlational not causal. If a developer is skilled, experienced, and has good taste, they are going to survive for multiple games AND they are going to have a good looking game that attracts people.

But overall, I just advise people to keep at it, do not quit after your first game fails.

Games in this tier earned between 1000 to 90,000 wishlists in their first two weeks on Steam. The games in this tier had all the qualities that I mentioned in the “Natural Visibility” tier (good graphics, good capsule, right genre) and “great hook / existing audience” tier. But what got them into the “top tier” category was that they had a huge viral marketing campaign. These folks won the game development lottery.

But all of that wasn’t all the Stray Fawn team – they paired these natural advantages with some amazing viral marketing. They got a viral reddit post on r/gaming that amassed 133,000 upvotes and made it to the front page of r/all. Here is a link to that post:

They also had several viral tweets about the game.

And they paired it with a very successful kickstarter that earned over $176,440.51. Link to the kickstarter:

Choo-Choo Charles did an even more amazing job with their marketing earning an eye watering 90,000 wishlists in its first 2 weeks.

This feat was accomplished by having an existing audience from previous games, a great game in the right genre, and a hook that was inspired by media that had proven to have viral potential (an evil Thomas the Train). Plus they announced their horror game at the right time – October 1st. Check my full writeup of how the developer behind Choo-Choo Charles accomplished this here.

All the games at this top tier had everything going for them: Beautiful games in top genres on Steam, established following from previous games, and highly coordinated marketing efforts that resulted in viral content on big platforms like Reddit or with streamers.

What you can learn from this

Your 2 weeks are not a death sentence

A wishlist isn’t a promise – they are just an indication of interest. There isn’t a clean or consistent conversion factor for wishlists to sales. It is too unpredictable. However, I feel wishlists are a better indication of what is working. If you run a marketing campaign and don’t see an impact on your wishlists, that indicates the message wasn’t the right one or aimed at the right audience.