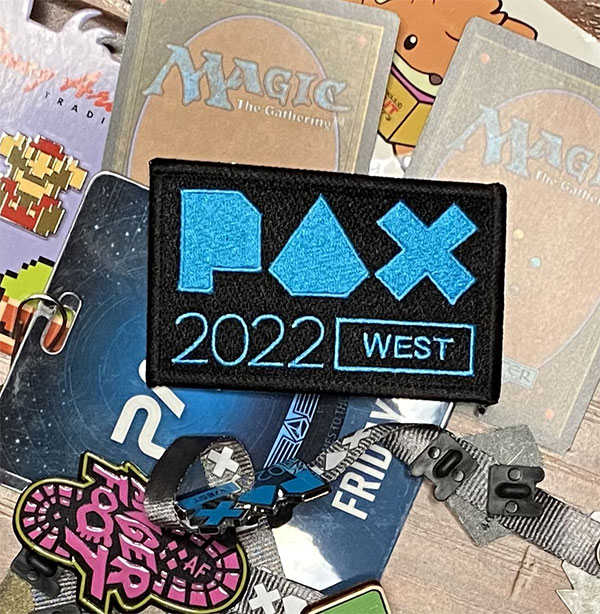 Last weekend I attended my first PAX. My favorite thing there was that I finally met so many readers of the blog! If I met you, I had such a good time and thank you for saying “hi.”

Now PAX is mostly for fans to be… well… fans. So it was a bit different from GDC which is mostly about the craft of making games. So I mostly filled my time doing in-person field research of normal ass gamers in their natural habitat.

Some of the talks I am writing about were recorded earlier and can watch them on these twitch streams. Here is a link to all the streams.

So here is my trip report on PAX West. Here is what I saw and did.

Pitch Perfect – the Art of Pitching Your Game – A Workshop

Matt is a senior XBOX official and his talk was target at game developers. It was full of tips on how to pitch their game to anyone whether it is XBOX, a publisher, journalists, or even fans on a store page. The emphasis was really on how to succinctly summarize your game.

Matt had one really strong point that stuck with me. It goes something like this (I am paraphrasing) “Your pitch has to be like a meme. It must be so clear and simple that the person hearing it can then go on and accurately tell it to someone else without you in the room.”

This “reproducibility” aspect is so important because whoever you pitch has to go on and pitch their boss on your behalf. In fact a journalist I was interviewing later that day said something similar. They often go visit booths that are recommended by their colleagues. Those journalists will retell your pitch to fellow journalists.

This also reminds me of a thing fans of flag design (vexillologists) say… “a good flag is one that someone can redraw from memory.”

So if you are writing a pitch and wondering if it is good, see if a friend can accurately recited it a day later.

There are 3 basic ways to describe your game:

Side note: this pitch is good because it establishes genre and is clear that it is not an fps because that is what you might expect with Call of Duty devs. So that is important.

What should be in any game description

A case for cozy: Why we really need wholesome games

This panel was mostly aimed at a general audience introducing them to Wholesome games. So not many tips for game designers here.

However, it is good to listen to so you can get a better understanding of a very popular genre on Steam. Even if you have no intention of making a “wholesome” game it is worth watching.

This panel was also hosted by Jenny Windom. The panelists just listed games they were excited about. Again, audience here is mostly gamers who might not know much about indie games. But it is just interesting to see what games are coming soon. It is also interesting to hear what other people say about games. Kind of like that pitch talk I described above.

Ok this talk wasn’t very helpful from a developer perspective. BUT, it is a very sneaky bit of content marketing perpetrated by the team at Rogue Games. It is very clever what they did here and worth taking notes.

Ok so typical PAX gamers love Reggie Fils-Aimé. The folks at Rogue Games know Reggie (he is a company advisor.) So they got him to speak on their panel. Then the Rogue team pitched this as “What do we look for in indie games?” They basically lured a bunch of Nintendo and Reggie fans to a theater to pitch them on Rogue Games.

So Reggie comes in from the back of the theater with music, then slowly struts up the main aisle high fiving fans. Zukowski Side note: He gave me a high five. Not going to lie, it was cool.

But then most of the hour was spent on a panel discussion mostly advertising Rogue games. They showed trailers, interviewed developers, and then answered 1 or 2 questions about Reggie’s time at Nintendo. It was a very clever bit of content marketing.

So information-wise it wasn’t a very good talk. The only thing you really learn by attending is the upcoming roster of Rogue Games.

But from a content marketing perspective, it was very smart.

Not a single PAX fan stood up and said “BUY AN AD!”

However, there was a bit of a missed opportunity here. They let the audience into the theater quite a bit early and there was a good 30 minutes where people were sitting there waiting for the show to start. They could have very easily handed out a clipboard where fans could have written their email address to be added to the Rogue Games mailing list. Then after the show they could have emailed everyone a special message from Reggie giving his classic lines (“My body is ready”) and a link to all the Rogue Games with a CTA to wishlist each one.

Again, the idea and the show were great. Just wish they capitalized on this captive audience better.

Again, this was a talk mostly aimed at fans, and this talk covered games that were released 30+ years ago. So probably not much exciting marketing stuff from this. HOWEVER, there were a couple points I thought were interesting.

This was a talk by a bunch of folks who were talking about game genre and the relative popularity of it. As you know genre is the biggest decision you will make that will affect the success of your game. So this discussion was all about the viability of the Adventure Game genre.

Dave Gilbert made a great argument that it isn’t so much that Adventure games died, it is just that all the other PC game genres became so popular that it was a missed opportunity if you didn’t move on to another genre. And when Doom was released it brought in so many new gamers that liked action, that this new population dwarfed Adventure Games and made them seem irrelevant.

This is exactly what I think is the case with genres like puzzle games and platformers. Yes you could work really hard and get top-notch graphics and work extremely smartly to build a community and you MIGHT be profitable making those games. Or you could just release strategy or sim game and make quite a bit more with much less work.

Very interesting to hear these folks talk about that.

Also Ron Gilbert mentioned how hard it was to make a trailer for adventure games because most of the action is a single character slowly walking across the screen. Roberta Williams mentioned that they purposely add action to their game so that they will have good stuff to add to their trailers. Roberta has the right mentality. While you are developing your game you MUST keep an eye out on how your game will look when it is marketed. The product and marketing are inexorably tied together.