Gut level, how did this festival perform compared to past ones?

Here are some basic stats

Here is the graph of the number of wishlist earned during the festival. Each bar is a different game I surveyed. The games with the most wishlists are on the left, fewest on the right.

That number one game is Manor Lords which earned an eyewatering 309,463 wishlists during the festival week.

Here is that same chart without Manor Lords and some extra lines. Just so you can see some more detail

If you are like “how do I make a game that steam wants” look at Manor lords.

As far as how well Manor Lord did, t is insane. Manor Lords earned more than the next 4 games COMBINED.

But why so much better than the other games? Streamers. Here is the CEO of Hooded horse.

It’s basically all influencers and journalists — we didn’t run any advertising or anything like that. There was amazing reception on YouTube/Twitch, which goes back in a lot of ways to the demo being great. Manor Lords is also a very wide interest game.

Tim also said this last minute tweet just before the start of next fest resulted in a ton of DMs asking for codes.

The 3 buckets of visibility

But across all games, there are basically 3 outcomes from a Steam Next Fest.

You have a high enough velocity or wishlists at the start of the festival to be featured on the front page. There are 3 tabs and 12 spots per tab before you click “Show More.” Once you are on this front page, you are pretty much pinned there for the entire festival. The results for being featured here are HUGE: 300,000-42,000 wishlists for the festival week.

Option 2: On the fence

Your game is ALMOST on the front page. Maybe it is the 15th most played demo. The game is seen by people who are very curious and click “Show more” a few times on the very front widget. These “on the fence” games do appear on the top of the genre-specific-sub-pages such as Action, Adventure, Strategy, Platformer. These games earn 40,000-3000 wishlists during the festival.

Pretty much all the other games. These games range in the 2999-100 wishlists earned during the week.

What does it take to get the top 2 buckets?

There are 3 tabs to get to the front page widget: Popular upcoming, Most Wishlisted Upcoming Games, Daily Active Demo Players. A few games in my survey were right at the bottom of those lists, so we can estimate the minimum requirements to appear on the front page:

Here are the typical numbers for the games surveyed:

In the following chart, each bar represents a game and the left-most game earned the most wishlsits, but the bar height is the median playtime in minutes. I also added a simple trendline.

Soulstone Survivors was the demo with the longest median playtime in my survey at an amazing 3 hours.

Capital Command is one outlier to my theory that Median Playtime correlates to wishlists. The game earned a very respectable 22862 wishilsts but had a median playtime of only 10 minutes. The game’s publisher (Hooded Horse CEO Tim Bender) suspects that’s because the game is a very niche, very hardcore space sim. A bunch of Steam Shoppers bounced quickly thereby lowering the median play time. However, it was the perfect game for that dedicated subset.

Anecdotally, I was talking to a few developers who had demos out way before Steam Next Fest and they said their median playtimes dropped quite a bit during the festival. There are just so many games during the festival that players are going through games faster.

The average was 89% decline in wishlists from the festival

The median was  85% decline in wishlists from the festival

Here is the graph with the percentage for each game. The graph is sorted so the highest earning wishlist games are on the left. The higher the bar, the higher the proportion of wishlists earned the second week.

As you can see, the games that earned more during the festival continued to earn more after the festival. Also remember that this is showing percentage and the games on the left earned a LOT more wishlists so it is even more impressive that their percentages are so high.

The single spike there at 80%? That is the game Tower Escape. The developer said after the festival they saw a huge upswing in wishlists from China. He couldn’t find the specific source but suspects a Chinese streamer found it. 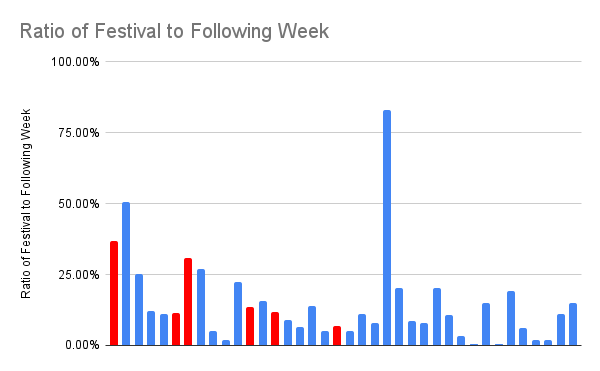 If you compare games that pulled vs games that didn’t pull their demo you get this:

As you can see, the games that took their demo down immediately after the festival had a higher median and average wishlist earnings the following week.

I don’t know what to make of this data. To me it makes sense to leave it up so you can pick up some streamers who maybe didn’t play your game after the festival. Maybe my sample size is too small here. Only 6 games pulled their demo immediately compared to all the others.

On average, the total wishlists earned was 6.78X the first day.

I suspect that a lot of this has to do with placement. So here is the Day 1 to Festival multiplier per visibility bucket:

So what did we learn

The festival is VERY beneficial if you are a game with some interest. Games that are in the neighborhood of 75,000 wishlists or have the capacity to earn 5500 in a 2 week period have a real potential to get into the upper tiers of the festival and really make a ton of wishlists. This is why my recommendation is always to participate in the last Steam Next Fest before you launch. It can take time to get up to those target wishlist numbers. Use other online festivals to test your demo to make sure it has a long median playtime and is attractive to streamers. If you find it has the “excitement” to get to the top, then participate in Steam Next Fest.

Steam really loves crafty, build-y, simm-y, style strategy games. 9 of the top 15 surveyed games were these types of games. 3 of the top 15 were action games (like Soulstone Survivors) There were a couple surprises in there like a 3D puzzle game, a point and click adventure, and a narrative adventure (Slay the Princess). If you want to build a long term career making games on Steam, it is very important to understand what this audience wants. If you want to understand the Steam customer, go back to the festival pages and look at the games at the top of the charts, play the demos if they are still up, buy the ones that have released, try to get a sense of the types of games that players are excited to play.

Take your demo down?

I am not sure I have enough data to give a definite conclusion but I did see an ever so slight difference where games that took their demo down had a higher post-festival wishlist rate.  Again, early data. I would still recommend you keep your demo up because in my gut it tells me that your game itself is your best marketing tool and if you have a good game letting people play can only get them more excited. But I will keep watching this number.

Want to learn more about festivals?

Check out my talk about making demos

Check out my write ups of past festivals here: