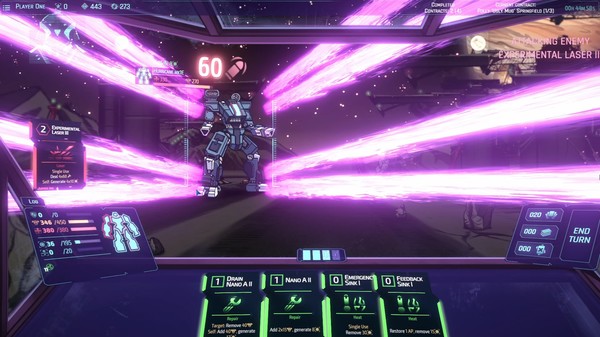 This is the story of how one indie dev left his demo up indefinitely and lucked out in getting a major streamer to cover his game yielding over 1800 wishlists.

The rise of virtual festivals has incentivized indies to create free totally public demos. Overall these online festivals are super effective and yield waaay more wishlists than the old in-person ones.

However, too many indies have been removing their free demos as soon as the online festival is over! In this week’s article I am going to give you some reasons why this is a mistake and you should consider keeping your demo up as long as possible.

Jupiter Moons Mecha is a card-battling mech game made by a two-man-development-team, lead by a developer named Artur (studio name RockAndBushes).

The game features a 30-minute demo that guides players through the basic gameplay loop. If you want to try the demo you can download it here for free!

Artur was browsing the official Discord server of popular variety streamer SplatterCatGaming when a random splattercat fan posted a link to Jupiter Moons suggesting Splattercat play it on Stream. Artur, wisely, leapt into action thanking them for the link and answered some of their basic questions. Here is a screenshot of the exchange.

Sure enough Splattercat saw the request and responded

About 20 days later, Splattercat posted this stream of him playing the Jupiter Moons Mecha demo:

A gain of nearly 800 wishlists within 24 hours of the video going up. The one day spike was higher than the entire Steam demo festival that he participated in back February 2021.

Over the next few days the wishlists trended back towards baseline until another streamer picked the game up and gave it a slight bump upwards.

That is a long slow-moving sequence of events that played out over the course of a month. If Artur had pulled his demo after just 1 week, none of this would have happened.

Keeping a demo up for just 1 week isn’t long enough. It takes time for people to discover your game and recommend it to others.

Bonus lessons from this

Victor Burgos is the developer behind the cat-based 2D/3D platformer Neko Ghost, Jump! Victor has been very diligent about getting his game into festivals such as Pax South and the Tiny Teams Festival. Through many years of trial and error, Victor has also ended up with the opinion of keeping his game up indefinitely.

Victor does sympathize as to why indies might want to pull their demo when not in a festival:

[Developers] have to maintain [their game] (because if the game’s progressed nicely, you don’t want your ugly ass game demo to deter people from WLing) and [developers] may give away too much of the game (most devs that I see, and even talked to today, were talking about 1 hour+ game demos)

Ultimately though he said

Yeah, I think there’s more pros than cons, but the cons may be a really big deal depending on the game.

What the press thinks about removing your demos

In fact, Victor was talking to Andy Chalk from PCGamer about demos and the writer explicitly told him that developers need to stop removing their demos from Steam. Here is their conversation

I reached out to Andy to clarify this quote and he told me:

Time-limited demos may have some small PR value because they force a relatively short, sudden spike in demo plays, but what’s the real value to gamers who aren’t pretty solidly committed to your game to start with?

Basically, the press doesn’t have the time to play every game during a festival. So you are just hurting your game’s chances by removing the demo before the press can get to it.

Based on these stories from these developers I think it’s imperative that developers keep their demos up indefinitely.

Content creators are a great way to get your game free visibility (just look at Jupiter Moon’s 1800+ wishlist boost.) If your game is only up for a week during a festival you are reducing the odds that an influencer will discover, make a stream of it, and have their audience play your game. These things take time.

Independent developers don’t have many opportunities to increase their visibility so we need to maximize these spontaneous moments as much as we can.

Imagine you are fishing (in this metaphor your demo is the hook at the end of the line). You need to keep your hook in the water as long as you can to maximize the chances that a fish will find it and bite. Posting then removing your demo is like dipping your hook in the water then yanking it out before the fish even have time to swim over to it. If anything, all the splashing about will just scare them away. You are basically hoping your hook miraculously lands in a fishes mouth.

We must maximize the exposure of that demo by leaving it up. It increases the odds someone will discover you.