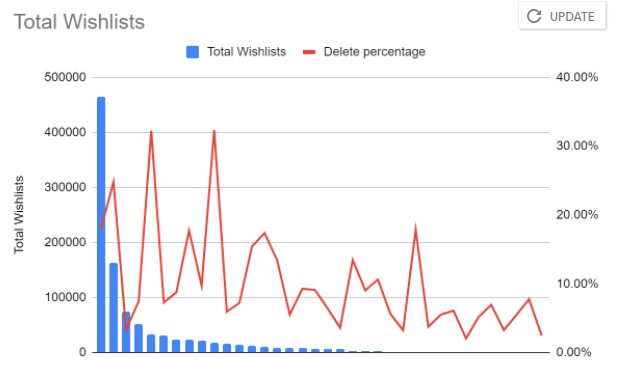 This is another post in my continuing series of benchmarks while you are marketing your game.

On Steam you can create a page for your game before it goes on sale. It is referred to as a “coming soon” page. This preview page is a great way to collect wishlists way before you put your game on sale. It is so important because the more wishlists you have, the more people who will buy it the day it goes live, and the better your chances are that you will tickle the Steam algorithm to give you more visibility.

Launching a coming soon page is stressful for most developers because you are showing a game before it is ready. Maybe the art isn’t final, maybe the animations are crude, maybe you haven’t tested your marketing pitch. Relax though! I think developers are way too cautious about this and I have long argued that you should get a Steam page up as soon as possible.

When a developer does post their “coming soon” page, they immediately worry. Do shoppers hate my game? Is it ugly? Boring? What is a good reaction what is a bad reaction?

In this post I am reviewing the typical numbers you can expect in the two weeks following the launch of your coming soon page on Steam.

This data comes from a survey I sent out to developers. It is includes data from 57 games. The gross sales data is based on a subset of 41 games that have released fully.

If we look at just the 2-week averages across all the games in my survey we get:

As you can see there is a bit of a connection between the first 2 weeks and total wishlists earned but not super strong. See those blue bars way off on the right side of the chart? They earned quite a few wishlists over their life but had very modest starts.

My take is that most games earn about the same amount in the first 2 weeks which is right around 150. This is the organic visibility that Steam gives you for free when you first upload your game.

In the following graph I graphed the number of wishlists earned in the first two weeks but I also created series for each of the released games based on their revenue bracket.

As you can see the top earning games (diamond tier which is 1 million+ dollars gross revenue) have huge coming soon page launches.

One such game in this tier is The Rift Breaker. In its first 2 weeks it earned 6933 wishlists.