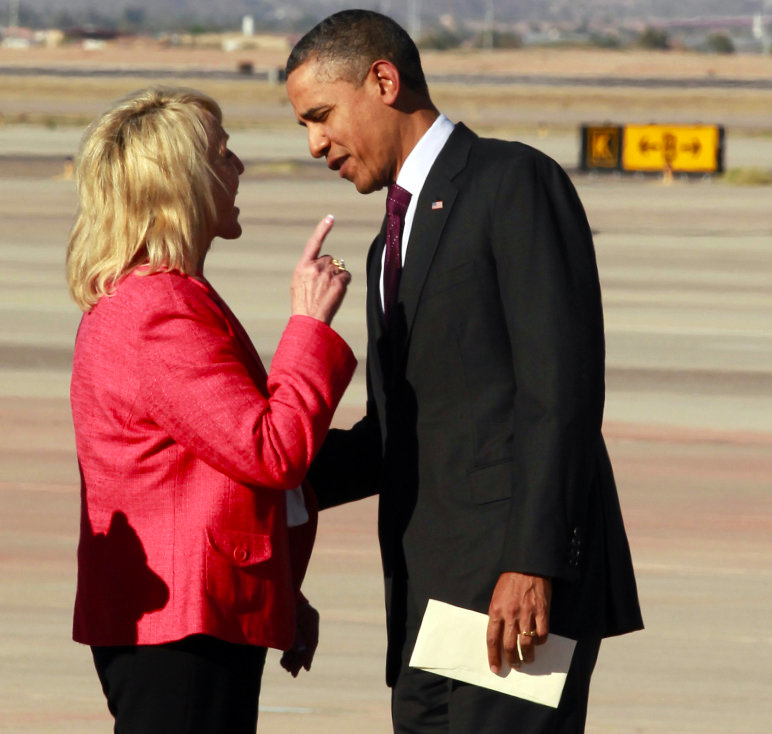 Elections are just giant, (thankfully) temporary marketing campaigns. When I was 22 I got my first exposure to marketing when I served a minor role on an insignificant state-wide campaign in Arizona. The position was minor but I learned a lot and I figure this year’s election would be a good time to look back at what we can all learn.

In 2002 I worked for Chris Cummiskey who was running for Secretary of State of Arizona.

Compared to Governor and Attorney General, Secretary of State is a relatively low-importance office in charge of managing elections.

We lost. Here were the final results

We were running against Jan Brewer. Now here is the weird thing about Arizona – the Secretary of State is second in line to the Governor. When Obama won in 2008 he promoted Arizona’s then-Governor Janet Napolitano to the position of Secretary of Homeland Security. This move left a vacancy which by law promoted Jan Brewer to Governor. If “Brewer” sounds at all familiar it is because you probably remember this utterly disdainful photo.

Ya that is Jan Brewer. I guess if my candidate had won back in 2002, this photo would have never happened. Double side note, she became a governor because of Obama so she should have been a bit nicer. Anyway, enough of Arizona politics. Here is what indie game marketing can learn from State-wide political campaigns.

Yard signs are a big waste of energy

The first thing many people think of when they think politics are the thousands of signs that line the streets during election season. What most people outside of professional campaigns don’t realize is that signs are just the external vestige of politics and they inaccurately assume they make up a large part of what works.

People spend so much mental and emotional energy on yard signs. Nextdoor is full of posts about Trump signs getting stolen, people getting arrested for vandalizing yard signs. In 2012 Peggy Noonan wrote a whole column about how she knew Mitt Romney was going to beat Obama because she saw more Mitt yard signs when she drove through Florida. I see so many posts on social media about fights in the streets because of street signs. It is the dumbest fight in the world.

The funny thing is candidates also spend waaay too much time and campaign resources buying yard signs and making their poor county campaign managers putting them up around the city. Why? Because it feels good to see your name around. It is visible, it is colorful, and it appears to show territorial dominance.

What’s the problem then?

Yard signs don’t work. They don’t tell potential voters anything about the candidate. They are untargeted (supporters of your opponent are just as likely to see them as your supporters.) Check out this article which describes the problem with yard signs as such:

The problem with lawn signs, as any campaign manager would probably tell you, is that they are expensive, annoying, logistically tricky to distribute and — most importantly — don’t seem to do much of anything.

Lawn signs are only 98.3 percent useless.

The only thing they do is make people mad when they see the opposition sign. When I was working for Cummiskey, I would get so many calls from little old ladies in Tucson about how they saw a street corner where there was a Jan Brewer sign and not a Chris Cummiskey sign. I would spend so much time and effort driving around putting up useless signs.

In my opinion, Twitter is the yard sign of video game marketing. It is loud, contentious, highly visible but not very effective. Just like yard signs, it sucks up a lot of time that should be spent doing something else (like making games.)

Developers who are new to indie games immediately assume “oh indie game marketing is spending a lot of time on Twitter.”

Twitter also distorts vanity metrics. Just like Peggy Noonan and political candidates, they just want to see their name on every street corner. Indie game marketers are so worried about getting their follower counts and retweet counts as high as they can. But Twitter stats are not as effective as steam wishlist counts and email subscribers. Watch my talk here about how poorly social media converts.

Beware of “vanity metrics” that seem important but don’t actually move the numbers. Instead, focus your attention on real metrics that have a real impact. Don’t get sucked into time wasting fights over how many street signs are on street corners or who retweeted you. You have games to make.

Billboards are even more useless than yard signs

In a political campaign, the only thing less effective than yard signs is billboards. That is because they combine low-information of yard signs with the high cost of renting billboard space.

If you see your political candidate buying a billboard you should be worried about them. It is the biggest indicator of a poorly run campaign. Typically it is the cranks and nut-jobs who buy political billboards. For instance, just outside of Tucson for 30+ years some nut has been running this billboard

Learning exactly where your audience lives and they go

You know how I mentioned that yard signs are basically only for the candidate?

One October morning Cummiskey was driving down to Tucson to deliver a speech. The day before the campaign manager for the whole operation, Vince, called me and said “Cummiskey is coming tomorrow and always takes the Grant road turnoff and then drives down Park Avenue. Line every corner along that route with his yard signs.”

The morning before his speech I planted as many signs as I could from I-10, to Grand Road, to Park Avenue. All 4 corners of intersections got them. I put them in front of business I knew would pull them up. It didn’t matter – I just needed them to last until Cummiskey drove through.

Sure enough, just before he stepped up to the podium to give his speech he had the biggest grin on his face and said “Chris! My yard signs cover the entire city! Every single street corner had them! How did you get so many out there!?!”

Learn where your target audience drives. Learn what routes they take. Then blanket the marketing on those routes. They will think your marketing covers the entire internet and that your game is ubiquitous. Buy ads on Reddit targeting their favorite subreddits. Buy facebook ads targeting their interests.

Thankfully I had Vince who told me Cummiskey’s route. But you don’t have Vince. Instead, you need to talk to your audience to find out where they go. Survey them. Interview them. You can see how to do that in a blog I wrote last year called How to Learn Who Your Audience Is.

Campaigns aren’t about persuasion they are about turnout

Campaigns aren’t actually there to change people’s minds. Really they exist to make sure the people who already believe their message are excited and ensure that they show up on election day. The real money is spent not on yard signs but on efforts to individually contact voters that are predisposed to their message to show up and turn out.

One of the most effective ways to do that is to ask them how they are going to vote to get them thinking about it. When I worked phone banks contacting potential voters, we would call very reliable Democratic voters and just ask them “So do you think you are going to go to the voting booth before you go to work or after?”

You could almost hear them thinking it over. They would say “Well I have to pickup my kids at 4 so probably just before that.” The research has proven that you just need them to make a plan and they will do it. This quote in this article is very important:

Direct outreach is most effective at improving voter turnout, suggesting that campaigns should focus on getting their core supporters to the polls than reaching out to a mythical middle.

Most Campaign Outreach Has Zero Effect on Voters

I talk to a lot of indies who don’t want to do marketing because they think it is “Sleazy” or it makes them feel like a used car salesman. They think that people don’t want to hear their message and they are spamming them. The opposite is true.

You are trying to find the people who think your game is so exciting they can’t live without it. You are building a following of people who say “yes, please tell me more about your game! You are the coolest human being in the world.” Your job is not to convince someone who only likes strategy games to suddenly give a damn about graphic novels. That is a waste of resources.

I recently wrote this article titled What Genres Are Players Looking For On Steam? It is all about the genres the steam audience is looking for. This gives you a rough idea of how many people are begging to have more games like the ones they love. Look at all those CRPG players saying “I am throwing tons of money at these games, please take my money!”

If you are at all interested in the science of marketing behind political campaigns, the book The Victory Lab is perfect for you. Here is a quote on one of the most effective forms of political mail.

[Political consultant Mark Grebner] collaborated on an experiment in Michigan in which they sent voters a copy of their own public vote histories, along with their neighbors’, and a threat to deliver an updated set after the election. It was marvelously effective, increasing turnout among those who received it by 20 percent. But no candidate or group wanted to be associated with a tactic that looked a lot like bullying – and a bit like black mail.

I was thinking about that quote when I opened this letter. It shows me, my address, and my vote history. Right above a blacked-out list of my neighbor’s names and addresses. It looks like Lionel Dripps has been reading The Victory lab.

If you google Lionel Dripps you can find a lot of variations of the letters from the Center For Voter Information. All of them follow similar patterns: here is how you voted, here is how your neighbors voted. Check out this Reddit Thread From a California Voter that got them

People find this approach a bit creepy. I don’t recommend using this for video games. However, the thing to note is that gamer’s buying behavior is heavily influenced by their friends. When I was doing my Steam user research I found that many gamers base their purchases on recommendations from their friends. In fact some users attribute 50% of their purchases to recommendations from friends. Watch that clip here

A more appropriate use of this peer pressure is to encourage your community to tell their friends about you. Give away free keys to your older games so they can give it to their friends. Multiplayer games like Among Us blew up because friends invited friends to play. Look at this email list plugin where you can incentivize people to recommend your newsletter to friends.

Basically, the best form of marketing is word of mouth. Look for ways to do this is not as creepy as Lionel Drips’ approach. By the way, the name Lionel Drips just sounds creepy.